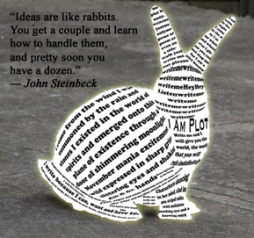 Plot bunnies can be quite tempting. You would be sitting there, working on your WIP when suddenly, “Ding! Ding! Ding! You’ve got a new plot!” Try as you might, you will not be able to ignore that call. It will keep bothering you and dancing around your head until you throw up your arms in frustration and admit defeat. You will scramble around for a scrap of paper or a pencil and frantically jot down anything you can remember.

I’ve been struggling with that lately. I know I have to learn to be monogamous with my plots just as I am monogamous with the books I read, but it’s so difficult! Plot bunnies have been invading my mind all the time, at a time when I’m desperately trying to finish a novel that’s – ironically – about an evil bunny who sucks the life from any artist he latches himself onto.

I’ve been working on this novel for more than four years now. Yes, I did take a break from it every once in a while to work on other projects (such as Puppet Parade), but it was always sitting there, glaring at me with its beady eyes and not allowing me to fully enjoy the other novels. Jealous, I presume, that I’ve been giving them more attention. Eventually, I couldn’t ignore its silent accusations and passive-aggressiveness any longer and started working on it.

This hasn’t been easy though. The Muse Bunny is already giving me enough trouble on its own, but coupled with the ideas that keep bouncing at me from all directions, I’m not having much luck. It’s like a faucet has been opened and I just can’t close it again. I keep jotting down all the ideas that I’m getting, stowing them away in my notebook for future use, but I swear you can almost hear them beckoning me to take them out and use them. Those sneaky little plots, I know that they won’t stop even if I do succumb!

However, I made a promise to myself that I will not start any new projects until TMB is finished and I’m sticking with it… regardless of how severe the itch to write new things becomes. It’s a commitment! Thankfully I’m but a few thousand words away from wrapping up TMB… how long it will take me to write these words, I have no idea, but hey, I at least I don’t have much left to go! I don’t think I’ll bother editing it right away… maybe I’ll give it a quick read through to make sure I haven’t forgotten anything, but I really want to start the next story, one I bet I will have much more luck with.

How about you? Do you stick to one story at a time, or do you prefer to spread your creativity among more than one project?