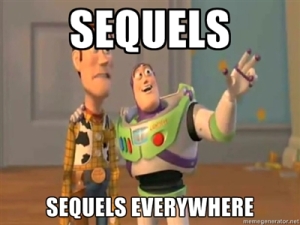 Book shopping has been proving a little bit difficult lately. Not because I’m trying to cut down on my purchases (though that has been rather difficult), but mostly because whenever I start to pick up a book, I have to consider whether I want to make a commitment to the rest of the books in its family. It’s like wanting to get married to one person, then end up “marrying” the in-laws as well.

… I gotta stop with these weird analogies.

But what I mean to say is: there are just way too many sequels out there today. When I browse the books on the shelves, I try to see if they belong to any series, and whether or not the series is complete. Don’t get me wrong; I don’t have anything against series. Some of my favourite books are part of series. But the thing about series is… once the first book hooks me, I know I’m in deep trouble.

Recently I was roped in by Marissa Meyer’s The Lunar Chronicles. I had heard a lot of good things about her book, Cinder, a futuristic retelling of Cinderella, and those good things were absolutely right. The book was fantastic and I loved it; however, it was part of a series of four books, out of which only two have been released. Today I managed to grab a copy of the second book and will be biting into it soon, but after that I will have to wait until 2014 and 2015 to read the third and fourth books. That makes me one sad panda. =[

This is not the only reason I’m miffed about this. It’s just that everywhere I look, I’m surrounded by series. Many new releases are just sequels to past books. Seriously, if you look at the new releases for May on Goodreads, you’ll find that the majority of them are sequels or first books in a series. You practically have to dig through them to find some standalones. I guess I can see the appeal behind series – a writer does not have to go through the trouble of introducing their characters again, their books have fans before they are even published, readers can read more about their favourite characters… however there are some problems, and those include the long waiting periods before the release of the next book, the second book syndrome (when second books do not measure up to the first), the difficulty faced by the writer in making sure everything fits perfectly…

Still, I would like to be able to pick up a book without worrying if it has any sequels (or prequels). In the books I bought within the past couple of weeks (yes, I know that’s too much. I feel so very VERY guilty!), four books are part of series. I thought Seraphina was a standalone, but a quick search revealed that I had been tricked. 😦 So now I’m stuck with a bunch of first books, and there are more and more on my shelves, and I find myself actually thinking, “Okay, Zen, caaaalm down. Maybe you won’t like all those books, and then you won’t have to buy their sequels! That’s good, right? But oh dear, all that money I spent on them…” ='[

My plan for these books is to read one standalone novel, then follow that up with a book from a series. Somehow I’ll manage to make my way through them. And no more books for the rest of this year… except for those five coming in the mail soon. Uhm.

How do you feel about sequels? Do you think there’s an abundance of them? Do you write sequels yourself, or do you prefer to stick to standalone novels?

53 thoughts on “Dawn of the Sequels.”