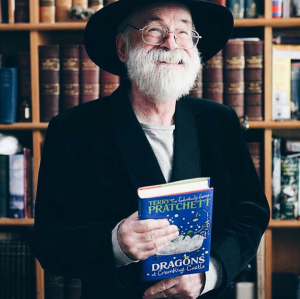 Yesterday Terry Pratchett, author of the brilliant Discworld series, passed away at the age of 66. To say I wasn’t shocked by the news would be a lie. Even though I knew he was diagnosed with Alzheimer’s and could no longer write his books without the help of his assistant, I still couldn’t accept that his death was imminent. Like… I don’t think anyone could even accept the possibility that J. K. Rowling would cease to exist one day, or even Stephen King. These authors have become so ingrained in the literary world that it would be impossible to imagine it without them. Though… I guess if you think about it, authors are forever immortal. As long as you always see their names on the shelves, they’re never really dead, are they? I’m comforted by the fact that later this year one last Discworld book will be published, one that Sir Terry finished writing a few months ago.

At times like this, I feel the best way to remember these authors is to share some of their best quotes. Here are some of my favourites.

The trouble with having an open mind, of course, is that people will insist on coming along and trying to put things in it.

END_OF_DOCUMENT_TOKEN_TO_BE_REPLACED

There was an episode in FRIENDS where Joey claims that putting The Shining by Stephen King in the freezer makes him feel safer from its scary clutches. Then he goes on to put Little Women in the freezer at a point where things get too sad for him. At the time I just laughed at Joey for being his usual silly self, but thinking about it now, I realise he may be onto something.

It’s not about actually sticking it in the freezer, per se, you do not have to do that if you’re not so inclined; you could stick it under your bed, lock it up in a box if you so desire or shove it to the back of your closet… whatever floats your boat. Rather, I think it’s an attempt to somehow prevent the inevitable. END_OF_DOCUMENT_TOKEN_TO_BE_REPLACED

Have you ever liked one of your own blog posts on WordPress, whether accidentally or on purpose? No? Well, the other day I accidentally liked a post of mine, and though I was quick to unlike it, WordPress caught me out and sent me a notification. However, this wasn’t similar to all the other notifications in which you lovely people like my posts because you think they’re awesome. 😉

Technically, the post was certainly about me, but that’s beside the point. Apparently liking it makes me vain. And you know what? So be it. I don’t mind being called vain for liking my own writing. There’s nothing wrong with feeling proud of my posts and novels, and I think every other writer feels the same way about their own work. In fact, I don’t think anyone would’ve gotten anything published if they weren’t. END_OF_DOCUMENT_TOKEN_TO_BE_REPLACED 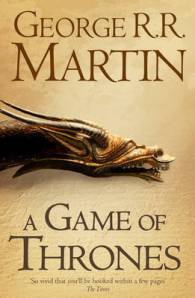 Lately I’ve been hearing a lot about A Game of Thrones… good stuff too. I don’t know what kept me away until now, maybe it was the number of books out there, maybe it was their daunting size… or maaaybe it’s the fact that the last two books in the series will be published in 2015 and 2020 respectively.

Yes, I’m not deceiving you. Feel free to check the books up on Goodreads for their expected publication dates. I was actually planning to venture – albeit timidly – into the world of George Martin, then I stumbled across the publication dates and backtracked. For curiosity’s sake, I checked Mr. Martin’s profile and was dismayed to learn that he’s 64 years of age. Let’s do a little math here, shall we? Martin will be 66 years old in 2015, and 71 in 2020. The average male life expectancy in the States is 75 years old. Do you see where I’m going with this?

I was getting ready for bed last night when I get an email notification from WordPress. I click it open, thinking it must be a comment or a reply, but to my immense joy (and shock, mind you) it was an email telling me this post got Freshly Pressed! I couldn’t believe it actually, and I had to read the email twice for the message to register.

Then I squealed so loudly I nearly woke everyone up.The sleepiness was completely gone, and I admit it took me some to be able to sleep after all the excitement, haha. Sadly I didn’t have any Twix to celebrate with, but I commemorated the event with a yummy chocolate cake!

END_OF_DOCUMENT_TOKEN_TO_BE_REPLACED

When a movie comes out, many people don’t bother watching it in theatres and instead opt to go for the DVD, saying, “I’ll just wait for the DVD to come out”, either because it’s not “theatre-material” or because they want to watch it, but are not so excited about it to the extent that they’d buy tickets for it. I’m more or less the same way with books.