“I had a major panic attack.”

This is a phrase people throw around too lightly, when they’re under a lot of pressure, or even when they’re just a tiny bit stressed… myself included. I recently finished writing a book where my main character constantly suffers from panic attacks, and I thought if I read enough about their signs and symptoms and people’s genuine experiences, I would be able to write about it properly.

Boy was I wrong.

I’ve been under a lot of pressure those past three months. I left my job early September, and the hunt for a new position hasn’t been successful. That is not to say I haven’t been working; I’ve actually been buried deep in freelance work and I’m generating more income than my previous salary. Still, it’s very nerve-wracking when you don’t have a steady paycheck, and I have gone through several sleepless nights over it. I guess it was inevitable that I would eventually crack under all that pressure. END_OF_DOCUMENT_TOKEN_TO_BE_REPLACED

I have a confession to make: I am a pantser.

That’s right. I never plan a book before writing it. I never know what the ending will be, or what the major point of conflict will end up as, or any other information beyond a main character and the very bare bones of a plot. This often leads to excessively long periods of writer’s block, but I honestly can’t help it.

I’ve recently begun working on a new book. I am exceptionally proud of it. I feel like it could be the one. You know that one book you feel will be the best book you ever write and has a higher chance of scoring you a publishing deal? Yes – that one. It’s still at the very first stages, and all I can reveal about it right now is that it’s (probably) going to be titled, “THE UNDERWATER LIBRARY”, and that it’s set in the 1930s, 40s and 50s… or to be more specific, pre- and post World War 2. As you might imagine, this means that it’s a bit grounded in the bloody history of that time period, and – yep, you guessed it – it also means it requires a whole freakin’ bunch of research.

END_OF_DOCUMENT_TOKEN_TO_BE_REPLACED

And it’s only taken me two years, two months and three days. Well… seven years and nine months if you count the last book I actually finished writing, which incidentally never got to see the light of day.

It’s no secret that I’ve been struggling with writing. I thought I’d have more time to write when I started living alone, but whoo boy was I wrong. What nobody tells you about working a full-time job and managing your own household all by yourself is you just never have time for anything. The nine-to-six life is not ideal for a writer. By the time you crawl back to your apartment you’re just too exhausted to do anything that requires oiling the cogs of your tired brain even further. All I want to do is have my dinner, a nice cup of tea and lose myself in a completely mindless activity (usually Netflix).

Writing is not the only aspect of my life that’s suffering. I have 155 unread books on my shelves. I have a whole trunk of ink bottles and calligraphy supplies that are collecting dust. My inbox has over +1000 unread emails and I’m scared to go through them. And this blog is just… cobwebs all over, I swear.

But anyway. There will be a time for a life update later (if any of my followers are still hanging around enough to care haha). But for now… I FINISHED A GODDAMN BOOK. END_OF_DOCUMENT_TOKEN_TO_BE_REPLACED

I won’t lie; I’m starting to feel kinda frustrated with myself. I feel like I’ve bitten off so much more than I can chew. I start new projects every other week or month – whether it’s launching my own business, or taking up calligraphy, or marathoning entire shows – and I almost never see them to completion.

But I am not writing.

END_OF_DOCUMENT_TOKEN_TO_BE_REPLACED

I turned on 29 on Monday, and like any other normal person, I celebrated this act of “leveling up“; however, unlike normal people, I did so by jumping out of a plane.

That’s actually what I told my tandem instructor – Nick – when he asked me why I’m attempting skydiving on that day – “Well, it’s my birthday today, and I thought – what better way to celebrate than to plunge to my death?” And he immediately took a step back and said, “Whoa, girl. That’s not going to happen today.”

To say I was terrified would be an understatement. As Nick and the accompanying photographer spoke to me and asked me questions, I could only offer one word answers and nod, tight-lipped at everything they said. Nothing against them, because they were just the sweetest, but I was SCARED AS HELL. END_OF_DOCUMENT_TOKEN_TO_BE_REPLACED

Five years ago I wrote a post about how I always avoid profanities in fiction, declaring my stance against including swear words and sex scenes in my books. To begin with, let me just say I’m still fixed upon the non-inclusion of sex (except maybe in fade-to-black-situations), but recently I’ve found myself budging when it comes to swearing.

When before I didn’t think they have any merit, I realise now that there are some situations that call for the occasional f-bomb. When before I thought I could find squeaky clean alternatives, I instead found myself struggling with authenticity. Try as I could to make things work without resorting to profanity, it just wasn’t working this time.

I’m working on a book (currently) titled “Mail Order Thief”, and my main character is as cynical and rude and angry as they come. When I set out to write him, to draw the outlines of his character, I tried to wash his mouth with soap but he spat it out and snapped at me. He was not amused, not in the slightest, that I was trying to drown out his voice just so I wouldn’t bruise my ideals. END_OF_DOCUMENT_TOKEN_TO_BE_REPLACED

So apparently today is the first Muslim Women’s Day ever. I was pleasantly surprised to learn that until I clicked on the trending hashtag on Twitter, and then I was promptly disgusted. There are so many misconceptions, so many views depicting Muslim women as beaten-down creatures that are basically slaves to men, so much sarcasm about how it’s sooooo great to be a Muslim woman on this day.

As a Muslim woman, I have a few things to say. This rant bubbling inside me just won’t die.

I’ve never spoken about my religion on this blog, mainly because I like to keep my religious and political views out of my writing and “public persona”, but here goes nothing.

There was never a time when I wasn’t a Muslim. My parents are devout Muslims, and I grew up in a conservative household. I wore my hijab at the age of 9, and I’ve never taken it off for 19 years now, even when it’s boiling hot outside. I’ve never missed a daily prayer. I fast for 30 days every year during Ramadan. I also refrain from physical contact with unrelated men, alcohol and gambling. END_OF_DOCUMENT_TOKEN_TO_BE_REPLACED

If you’ve ever been to Italy, you know there are temptations around every corner. All the restaurants and bistros look supremely inviting, and my friends and I had to resist stopping for a bite at each one. Of course, when it came to dessert… well, that’s a completely different story.

The one thing I wanted to try the most was a genuine, Italian tiramisu. And I did. Dragging our weary selves back from the Vatican and St Peter’s Basilica, we came upon a lovely restaurant called Il Falchetto where we sat out on the terrace and had our first Italian dinner and I had my first tiramisu. With a twist. Did you know tiramisu could come in pistachio? I didn’t either. And I fell in love. 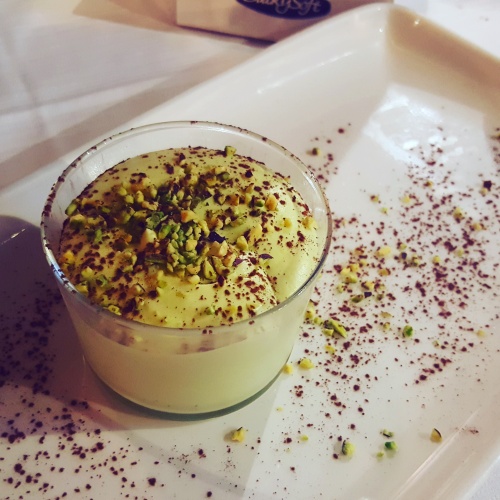 END_OF_DOCUMENT_TOKEN_TO_BE_REPLACED

For the second year in a row, I was unable to complete my Goodreads Reading Challenge. Even though I’d lowered my goal instead of going higher – as is customary for me – I just did not have the time to get to all the books I wanted to read. I tried to do too much… way too much… that I barely left time for myself to sleep. And it still wasn’t enough.

Yet I kept adding to my TBR pile, going nuts with my bookstore “raids”. In fact, my bookcase has really filled up compared to last year. And become so much more beautiful, if  I do say so myself.

Still, can’t go (further) into the new year without a wrap-up list! END_OF_DOCUMENT_TOKEN_TO_BE_REPLACED

Unless you’ve been living under a rock, you have probably heard some (or many) people complaining about the trainwreck that was 2016. Many famous people died, Brexit happened, Donald Trump got elected President, we’ve had a number of terrorist attacks and a coup in Turkey, etc. And yeah, sure, these are all bad things, but that doesn’t mean the year was any worse than any other.

People forget that bad things happened in 2015, 2014 and every other year before that. Why, we’ve had a lot of famous people die before… Leonard Nimoy and Christopher Lee in 2015, and Robin Williams and Philip Seymour Hoffman in 2014. Plenty of terrorist attacks occurred… in fact, I feel that 2016 has been calmer on that front than 2015.

On a personal level, I had an uncle pass away in 2016… compared to an aunt and uncle in 2015. I know it’s not a nice comparison to make, but I’ll still take the year with the one less tragedy.

But a lot of good things happened this year too. People simply choose to forget them.